'Prague College opened so many doors for me: this practical side is missing in other universities.' 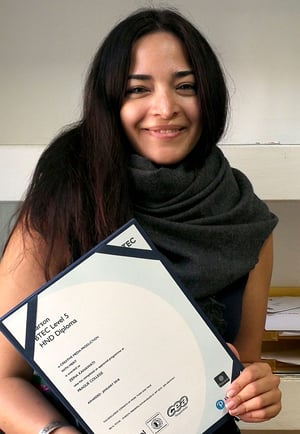 Three years ago, Zeina Kanawati moved from the increasingly unstable political situation in her home city of Damascus in order to study in Prague.

In the last two years she has completed her HND in Creative Media Production, and has now landed a position with the Paris-based NGO ASML (Association de Soutien aux Medias Libres).

We spoke to Zeina about her time at Prague College and her reflections on life in the Czech Republic.

Zeina, why did you choose Prague College?

I studied English literature for my Bachelor's degree back in Syria, but I was always interested in studying journalism and maybe film studies. When I found out about Prague College, it was perfect. I met the programme leader, Masa Hilcisin, who was very positive and helpful; and I was enrolled really quickly and treated like family from the very beginning.

And the Creative Media programme itself?

I was part of the first group ever to take the course and it went very well. In the course of the first year, I produced a programme which was broadcast on Czech Radio, I wrote articles which were translated into Czech and published in the professional print media. That's what I really liked about the programme: it took you immediately to the core of the job.

Did the programme change the direction in which you hoped to go?

Not really, but it did give me a greater variety of skills. For example I was always able to write about events or make interviews, but I'd never written film critiques before, or gone to cover festivals.  My favourite class was Film Studies; it was very detailed, and in-depth, and provided me with such useful experience.

Was moving to and living in Prague something of a shock?

I must say that I was lucky to start with a university because this is the most welcoming atmosphere; added to which Prague daily life and public transport are very easy. In terms of similarities, I came from a very old city, and so I like walking in the historic streets of Prague, which give it a real identity.

Do you feel you have been accepted here?

I have found Prague to be a very friendly city. Of course it helps to have the Czech language in order to integrate fully and I had the basic framework, though I'm still learning. There are other Syrians here, a few, only a few, and I think I know them all, but we don't have a community as such.

Tell us some more about the NGO

The NGO is called ASML, it's an association that supports journalists in Syria. As part of my studies at Prague College I researched the rights of freelance journalists, especially those civilians who are not supported or insured in any way. Media channels hire such people because they don't have to pay them very much; and they have no basic rights. As a result of the broadcast of some of my work I was then contacted by the Paris office of the NGO and they hired me.  I occasionally visit head office, but most of the time I'm able to work remotely from Prague. It's exactly what I want, but I couldn't have done this without Prague College. They really opened doors for me.

Why would you recommend Prague College to future students?

First of all because of the support students get from the team - not just the academic side but also Student Services and the administrative side of the college; they are very warm and welcoming.  Then the programme itself, which is really modern, up-to-date, and practical. This practical side is missing in a lot of other universities. But with Prague College within three months of graduating I was able to get the job i really wanted, working as a journalist for a humanitarian cause.