Prague College School of Business has a great interest in blockchain technology and cryptocurrencies, and encourages all School of Business students to fully engage and investigate the implications that these new technologies will have on business and the economy.

In 2018, Prague was also named the most crypto-friendly city in the world, and the best place to spend cryptocurrencies.

So with the future in mind, the college set up a Blockchain Society where students can participate in networking and debate with other participating university blockchain groups around the world via the School of Business' officially recognition as a Mousebelt Blockchain Accelerator University. Mousbelt is the largest blockchain education group globally offering mentorship, university networking and social network support to students and lecturers.

Additionally, the School of Business aims to establish a Blockchain Centre to investigate the implications of blockchain technology, crypto assets and distributed ledger technologies (DLT) for companies and their business models. 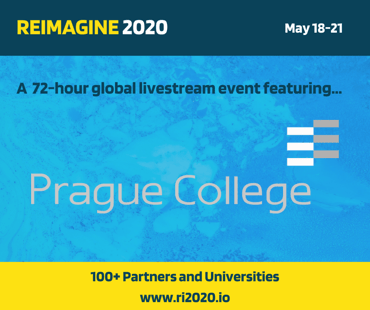 As part of Prague College's recognition as an accelerator University, representative students were asked to participate in REIMAGINE 2020, a 3 day global Blockchain conference which featured 100 plus speakers who were interviewed from the Mousebelt headquarters in California.

Francesco & Salman's interviews were recorded and are recommended viewing if you have an interest in Blockchain, how it will effect businesses in Europe and Czech Republic, and are interested in hearing how our ambassador students hope to create and implement effective solutions utilising these technologies.