Prague College closes its doors (just for a day)

Why is Prague College closed on 28 September every year? We take a look at the fascinating origins of 'Czech Statehood Day' 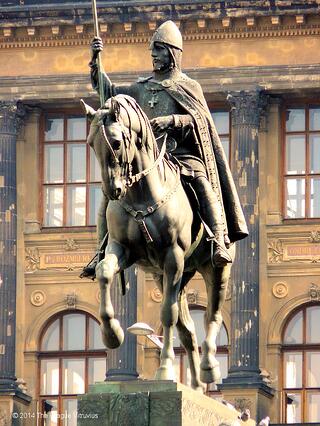 Try getting into the college today and you'll find the doors locked. Has there been an outbreak of some unpleasant virus? Are the students and lecturers already exhausted after only a week of intense teaching? Or is it to allow them an extra day to recover from Friday's exceptional Welcome Party? None of these things - it's actually a state holiday, and here we explore the story of this annual 'day off'.

Every year on 28 September, businesses and institutions across the Czech Republic pull down the blinds, shut the front door, and stop working for one day. It's one of two significant public holidays each autumn that have their origins in the strange and often turbulent history of the region.

According to tradition, the tenth century Duke Wenceslas of Bohemia - a member of the ruling Premyslid dynasty - was literally stabbed in the back by his wicked brother Boleslav the Cruel on this day in the year 935 (or the year 929 depending on which version of the story you believe). The killing was no doubt aided and abetted by the boy's mother Drahomira, who had also been responsible for the strangling of Wenceslas's grandmother Ludmila four years earlier.

As a result of this dynastic upheaval, the early Czechs gained two saints to add to their newly-formed Christian state: Ludmila (whose church is in Namesti Miru, close to the college) and Wenceslas himself, whose body was moved to Prague Cathedral, and whose remains became the centre of a strong national cult. He almost immediately became associated with the preservation of the nation. Often depicted on horseback, Wenceslas is said to command a mythical army who will rise up whenever the borders of the Czech lands are under threat from a foreign power.

He is also remembered for his kindness to the poor, one story relating how Wenceslas (or Saint Vaclav, as he is known here) left his palace in the middle of a snowstorm to help gather 'winter fuel' for a local peasant. This is the tale, rediscovered in the nineteenth century, which found its way into the well-known English Christmas carol, 'Good King Wenceslas'.

Like so many stories of long ago, the boundaries between fact and fiction are considerably blurred. But one thing is for sure: in the year 2000, the Wenceslas legend was permanently tied to the history of the modern Czech Republic when it was announced that the saint's day would be renamed 'Czech Statehood Day'. On this day, Czech flags fly from all public buildings, people take a day off work, and even hard-working Prague College students get a chance to rest from their studies.