The French Institute has been a part of the cultural landscape of Prague since its foundation in the 1920s; in the last two years, there has been significant cooperation between Prague College and the Institute. We spoke with deputy director Alexandre Pajon about the shared interests of the two establishments.

M Pajon, can you start by telling us something about the history of the French Institute?

'Of course. The French Institute in Prague has a venerable history - it was started by Ernest Denis - a great friend of the first Czechoslovak president Tomas Masaryk - who laid the foundation stone. It was originally a department of the University of Paris - the Sorbonne, who endowed the library (today containing 70,000 volumes).  After the second world war, the building became the property of the French state. During the cold war the library was still in place, but it was more difficult to access. According to communist law, the building had to be divided into apartments, so it became the home of French diplomats. From the building opposite on Stepanska street they spied on people coming to the building, but even so, dissidents were able to come here and gain access to the French press.'

And what role did the institute play during the decline of communism?

‘During the 70 and 80s events continued to be held - lectures and screenings; and the institute continued to play a diplomatic role. For instance when Vaclav Havel was awarded an honorary doctorate by the University of Toulouse, he was unable to travel to France, so the director of the French Institute awarded it here in his private apartment!' 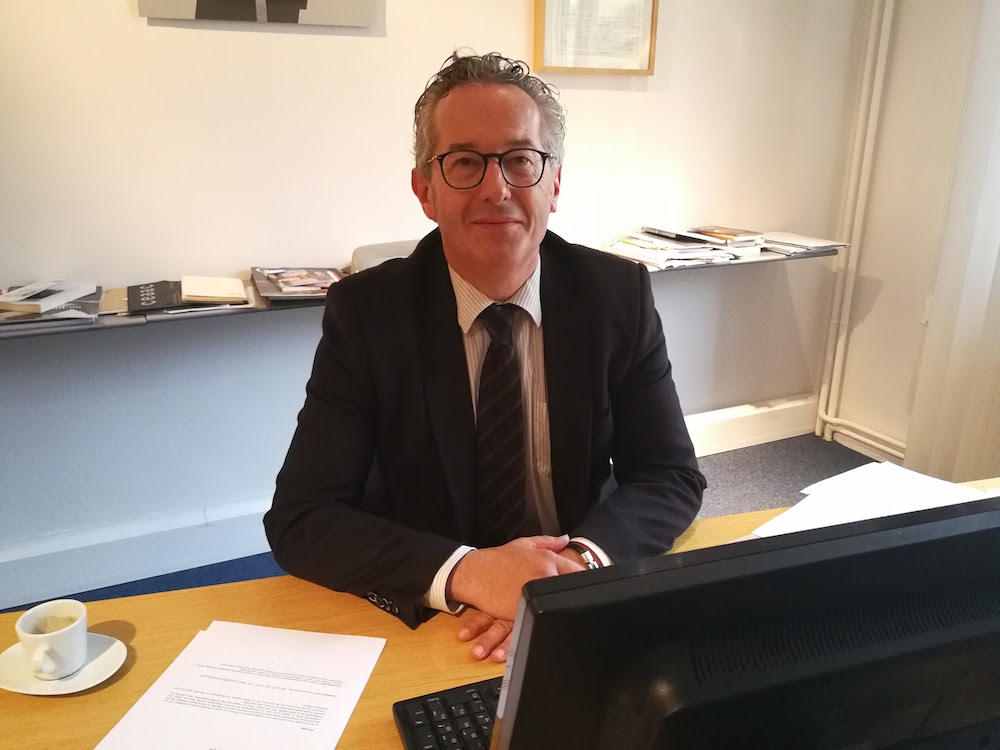 "We feel this relationship is particularly effective because Prague College is an international private university, modern, and with a youthful outlook" - Alexandre Pajon, deputy director of the French Institute in Prague

What is your own background?

'I have a doctorate in History and originally taught in Paris, before moving in to the sphere of international cooperation. I still publish - my specialism is in French intellectual life in the inter-war years, for example Levi-Strauss. I’m a German speaker with a particular love for Central Europe, which is why I returned here after stints in Morocco and Greece. The biggest difference is that in 1994 when I first visited Prague, there were many German speakers, but when I returned I found that fewer people spoke the language and I had, so to speak, lost my ‘key’.  That was a major change for me personally.'

And how has the institute moved with the times?

'After 1989, the Institute’s focus shifted very much towards education. During the cold war, Czechs were able to learn French, as the socialist government was keen to promote French values against the Anglo-Saxon. And we still are organizing French courses today, for around 3000 students per year.  French culture, the library, teaching French, and fostering educational co-operation between schools and universities in France and here. We had a number of famous educationalists, including for example, Vladimir Jankélévitch.'

And as a cultural centre?

'We have a small gallery, a 200-seat cinema and our prized library. I’ve already mentioned cultural networking in France (for example a recent event in cooperation with Prague’s MeetFactory took place in Strasbourg), but there are also many examples of cultural cooperation here in Prague: the French Film Festival, journalists, artists, art exhibitions at galleries like the National Gallery or Dox. And of course with schools and universities such as Prague College. '

Perhaps we can finish by talking in more detail about that cooperation?

'Normally we work with French schools and institutes, but we feel this relationship is particularly effective beacuse Prague College is an international private university, modern, and with a youthful outlook. We feel there is a good fit with the French Institute. We first got in touch because we were looking for student designers who could focus on campaigns, for example for our cinema programme. Later we opened our gallery spaces for displays of Prague College art and design work, last year by lecturers and this year by students. One could not imagine the same cooperation happening with other institutions in Prague. It is a question of scale and not of will. Again, the relatively small size of our institutions makes them a good match.

How do you see the future of the French Institute in Prague?

'We are a small organization with big outreach. We employ fewer than 30 people, but we serve more than 3000 students of French language, and 18,000 through our movie theatre. We are continually addressing our strategy, and it's important to see our offering through young eyes. We need to remain seductive, predicated on youth and vibrant ideas. We cannot increase our numbers indefinitely, but we want to retain our audience, and in the case of the cinema, increase the number of people who experience our films.'