Our graduates are busy.... in the world of hospitality 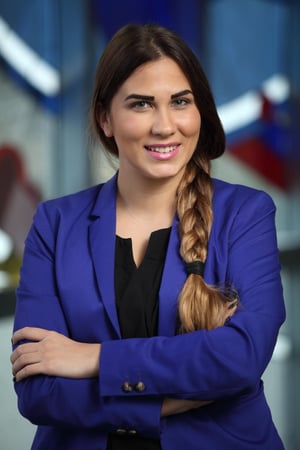 Itana Mirkovic, from Serbia, studied for her MSc in International Management at Prague College, graduating in 2014. Since that time she has dedicated her life to a career in hospitality management, and she now works alongside the General Manager at the newly-opened Hilton Belgrade.

Itana, how did you first get a taste for a career in hotels and hospitality?

It started during my studies at Prague College. I was able to get a six-month internship at the Prague Hilton, and was fast-tracked to full employment very soon afterwards. My work experience covered lots of areas in the hospitality industry: I worked in the executive office, the finance department, and housekeeping.
After leaving the Hilton and Prague I came back to my own country to seek a new job and challenges where I could apply in practice all that I had learned in the past during my studies and whilst working for Hilton Hotels in Prague.
But then your plans changed?
Yes - after I returned from Prague to my home town of Belgrade it was very difficult to find employment - actually I was looking for a job for almost nine months. After a long wait, I finally got a job in a non-branded, private hotel. I took the offer but was not that happy in a hotel which lacked the security offered by the Hilton.
After almost two weeks of working there, it was as though God heard my thoughts and sent me great news. I found out I was pregnant with my first child, so I stopped working due to the high risk to my pregnancy and I decided I would start again after my daughter turned one.  In the meantime, as luck would have it, I found out first Hilton was about to open in Belgrade. My former general manager from the Hilton in Prague supported my application for the position of Personal Assistant to the General Manager. I got the job and became the first employee in Hilton Belgrade (after the General Manager who hired me).
And how have things gone since then?

We worked together to build up an entire team of twelve people. We opened the first Hilton in Belgrade in March 2018 and now we have now been operating almost seven months with high average occupancy and we are number six on TripAdvisor out of 94 hotels in Belgrade!
Itana, that's a great ending to your story. We're delighted that your resilience paid dividends, and we look forward to hearing more about your continuing success in the industry.
Topics:School of Business