Congratulations to Zuzana Kaiserova and David Vaughan, both lecturers in the BA (Hons) Creative Media Production programme at Prague College, on the publication of their latest novels. Both books – one depicting the lead-up to the Second World War, the other about a post-populist Europe in which the major religions have been banned – are particularly relevant to the current political situation in Europe and beyond. 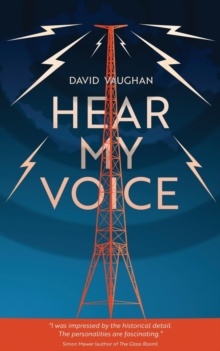 David Vaughan's documentary novel 'Hear My Voice' is the fascinating story of the Munich Crisis of 1938 seen through the eyes of a fictitious radio journalist.

Originally published as 'Slyšte můj hlas', the book won the Czech Book Prize Readers’ Award in 2015. The English-language edition, from Jantar Publishing, had its London launch at the end of September 2018 to coincide with the 80th anniversary of the Munich Agreement.

The cast is complex and fascinating: from Konrad Henlein, leader of the Sudeten German party, whose demand for autonomy eventually gave Hitler the excuse he needed to annex the Sudetenland, to leading patriots such as Alice Masaryková (wife of the first Czechoslovak president and head of the Czechoslovak Red Cross), and the writer and theatre director Karel Čapek.

But above all this is a story in which radio plays the lead role, as a means of disseminating hoped-for truths but also as a conduit for the worst kinds of propaganda.

'Kalandrova dcera', by Zuzana Kaiserova, is a dystopian story set in the near future which will appeal to readers of Margaret Atwood's 'The Handmaid's Tale'.

Set in the Czech lands following a terrorist attack on Prague, it tells the story of doctoral student Tereza Sundermann who returns from Brussels to find out the truth of what has happened to her father, the Christian intellectual Kalandra.

The novel, which is so far available only in Czech, is published by Volvox Globator.