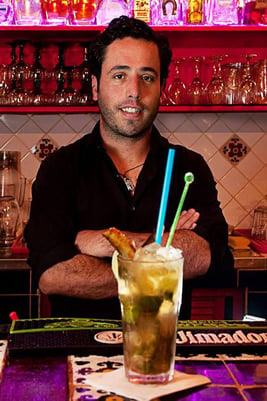 Ten years ago, a young Mexican began studying for his Bachelor's in International Management at Prague College.

Originally from Pachuca, near Mexico City, Patricio Ibargüengoitia knew something about agriculture, but his father advised him to travel — 'to broaden his horizons'.

Patricio arrived in Prague by way of Spain and Israel where he had followed the life of a shepherd, looking after flocks of up to 900 sheep at a time in the Pyrenées and learning the art of cheesemaking on a kibbutz.

By the time he started his studies, he was still shepherding a flock of around 100 sheep, in the Czech town of Beroun. Not a typical student job, but soon he was enrolled at Prague College and supporting his studies in more conventional ways — bartending, and homemade Mexican food deliveries.

It was then that Patricio made a strategic decision. He would start a restaurant. And now, ten years later, the place he started with three other Mexicans from Prague is famous throughout the city and even further afield: Las Adelitas.

Recently, Patricio came back to the college to talk to us about his latest initiative. We asked him first to tell us about 'La Calle Mexicana':

'Every year, Prague runs a series of street festivals called 'Zažít město jinak' (Experience your town differently) . As part of that we have La Calle Mexicana street festival for the past few years with huge success. It's a great way of getting people into the restaurant, but even more important, they experience something about Mexican heritage and culture. It takes place on 'Americka street' just off Namesti Miru on 15 September this year.

What will people be able to see and do at the festival?

'This year we are celebrating the 208th anniversary of Mexican independence which began in September 1810 with the great cry from the balcony: 'El Grito'. We're going to have music from the Prague-based mariachi band 'Azteca de Praga', a speech from the mayor of Prague 2 and from the Mexican ambassador, and a presentation in the shape of an Aztec pyramid by our resident shaman, Xolotl.  There's going to be drumming, dancing, and of course fantastic food from our restaurant.

Yes. Of course, we also have restaurants in two other locations in Prague: Lucemburská and Malé Náměstí. Each has its own distinct identity. And we're hoping to open two new locations very soon. One will be on Rumunská, again in Vinohrady. And the final one will be in a secret location. All I can tell you now is that it will be right in the centre of the city.

Your college days must seem a very long time ago. What was the main takeaway from your university education here?

Three things. First, I learnt to be really much better organized. Second, Prague College gives its students the freedom to learn and develop ideas beyond the curriculum - very important! Finally, the lecturers gave consistent helpful feedback. They were very supportive to me.

And what would you say is the most important lesson you have learnt from running your own business?

'The most important? That would have to be the family values. By that I mean that we generate a community feeling. It's all to do with teamwork and helping each other and not being too competitive.'