Computing students' work to be showcased at ExpoTees

On 16 and 17 May 2018, three Prague College computing students will have their work presented at the ExpoTees exhibition in the United Kingdom. An annual event run by Teesside University, ExpoTees is a showcase of outstanding work from final year students in Computing, Media and the Arts.

Prague College students have presented their innovative work at ExpoTees previously in 2014 and 2015, but this is the first time that the work of so many students has been selected for presentation. Congratulations to all three. We thought you might be interested in the following brief outlines of each project: 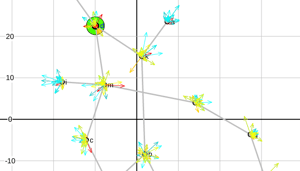 Graphs, mathematical structures consisting of nodes and edges, find their application within many fields of study. Drawing them onto a two-dimensional plane poses an unique challenge and there have been many approaches to it developed.

One class of graph-drawing algorithms revolves around simulating physics-like forces between nodes depending upon the fact whether they are connected or not. The simplest - yet very effective - algorithm of this class is the 'spring' model, which models the nodes as electrically charged particles and edges, connecting them as stretchable springs. Although this algorithm yields visually pleasing results, there are circumstances under which the edges hold very small angles between them in the produced images.

To measure this phenomenon, a novel method was developed which compares the angles to ideal angles around each node and calculates total statistical variance of this ratio over the whole graph. The implemented solution adds repulsive force between edge and other nodes.

The results of this work show that the proposed method is a viable solution to the zero angular resolution problem. The software developed allows the user to experiment with various aspects of the algorithm designed and see how it affects its effectivity in real-time. 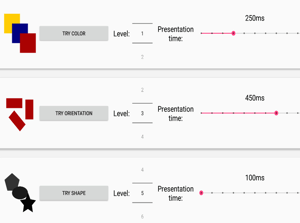 The project was done for researchers from Prague’s National Institute of Mental Health. Its purpose was to provide a platform for experiments in the domain of visual working memory training. The project implements what is known as a 'Change Detection Task', a trial which is used to examine the capacity of person's working memory and subsequently enhance it by training the subject's filtering efficiency.

The application was written in Java, for Android OS, and runs on a range of mobile devices. Besides the actual training, my application features mechanisms for reflection-like generation of CSV data sets and performance charting. During the development, a focus was placed on close collaboration with the client and research in the following areas: Android lifecycle and canvas drawing, parameter randomization, charting, and examination of what has been previously done in the field. 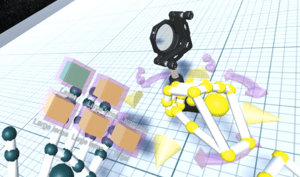 The project was created in collaboration with ELI Beamlines laser research facility to address the problem of controlling complex interactive environments in virtual reality. The facility uses 3D virtual reality applications developed in house to provide researchers with a means for training new personnel.

The project was aimed at developing a module that could be integrated with a Unity based VR application, and allow the users to control a 3D environment using hand tracking only (no additional input devices are required). The deliverables of the project included a Unity package that could be integrated in any Unity based project to enable advanced level of control over the environment.

Additionally, a demonstration scene was developed to showcase the key features of the utility.

Some of the key skills that helped me deliver the project included the use of software methodologies for planning the project implementation and organizing the communication with the client. Additionally, knowledge of the principles of object-oriented programming languages such as C# helped deliver a robust and flexible application. Just as importantly, understanding the significance of conducting secondary research helped me find shortcuts and avoid impasses during the development process.

Many congratulations to Dominik, Artem and Oleksii