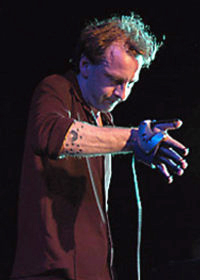 Matthew Ostrowski bases his work in familiar materials, controlling and manipulating them with digital algorithms to reach an alternative reality hidden inside them. For this special event in the visiting artist series, Matthew will be discussing works using Hollywood films, computer-controlled objects, and realtime performance systems.

A New York City native, Matthew Ostrowski is a pioneer in live electronic arts, having worked as a composer, performer, and installation artist for over 20 years, exploring alternative controllers, multimedia, and theatre.  An unreconstructed formalist, he has had a continuing interest in the density of microevents, rapid change, and using technology to stretch the bounds of perception and experience.

He has worked with a broad range of artists, from some of the world's leading improvisors, to MacArthur-award winning choreographer Elizabeth Streb, to the Flying Karamazov brothers juggling troupe.  A recipient of a NYFA fellowship in Digital Arts, he has developed audio and video software for dozens of artists in interactive video, extended musical instruments, sound installations, show control systems, and interactive juggling pins.

His work has been seen or heard on six continents, including the Wien Modern festival, the Kraków Audio Art Festival, Transmediale, Sonic Acts, ps 1 and the Kitchen in New York, Rencontres Internationales in Madrid, Dis-Locate in Yokohama, and Unyazi, the first festival of electronic music on the African continent.

He is currently most active as a member of the audio/video trio Fair Use, doing performances based on accelerated film classics, and in the duo KRK with contrabassist George Cremaschi.  Recent installation projects include the site specific Spectral City, shown in Germany and Japan, and Scarlet(t), a work based on the film "Girl with a Pearl Earring."