In cooperation with the French Institute, Prague College is hosting an exhibition of the final work by the graduating 2015 BA (Hons) Graphic Design class. Exhibited work will consist of final projects and portfolios of 34 students from over 10 different countries.  On display will be a wide range of work from the largest number of design graduates in the college's history. Exhibits range from digital and experimental media to fashion design, product design, corporate identity, print design and much more. 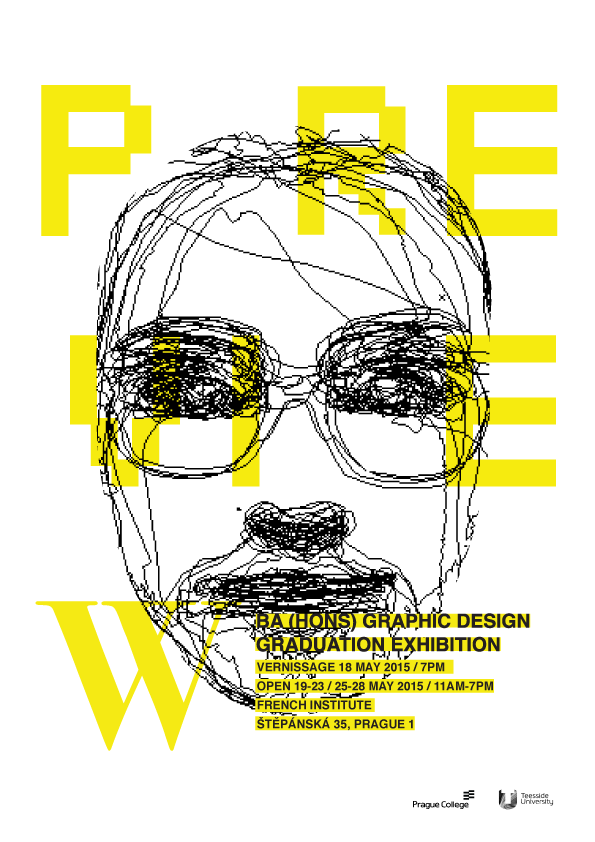 The poster for PREVIEW is based on the 34 individual faces of the exhibiting students. Each student was photographed, the image was manipulated and overlapped with another 33 images. The final picture was the abstract face of all participating designers, not individually recognizable, but one face representing the group. The low quality and chaotic visual language of the poster is intentional, reflecting the nature of working in a big group with many different personalities.

"Brought up between two cultures, French and English, and strolled all around Europe, Fiona Vollborth is a strong believer that great design hide great concepts and that bold ideas come from a lot of research.  There is always more to learn and that’s what’s so exciting !”

Regina came to Prague after living in Munich her whole life. Her special fields in graphic design are Editorial Design, Typography and Illustration. After graduating from Designschule München in 2014, she left her cozy hometown to get more experience in language, life and design.

Anna graduated from a very strict education as a Graphic Designer. She missed concentrating on defining her own indvidual style. To give this wish a chance, she decided to go to Prague. Currently she is planning to do a internship or Master's in Germany.

She got her first tablet in 2008 and that’s how she began discovering digital forms of art. She has explored many techniques of design and typography and developed her own identity during these three years of study. Her favourite things to draw are cats and food.

Diana Mihailescu is from Romania. Wanderlust has led her to many different parts of the world. Born a dreamer, she always inclined to art. After studying in Cairo and Venice she settled in Prague to study Graphic Design at Prague College. Diana is an individual driven by feelings, which are usually reflected in her work. Her assets are working with typography, photographs, using mostly black & white, resulting in modern, abstract and clean designs. Packaging and publishing are her most favourite aspects of graphic design.

Ivana Špačková lives in Prague where she studies and works as a freelancer, however, her second home is in Crete. She considers herself a universal designer but her main focus is contextual design and illustrations. She likes to be spontaneous when it comes to her work, using experimental techniques and crafting.

Ksenia is a young designer, passionate about editorial design. In the future she would love to become a chef-editor of a magazine. She believes that “the universe works by design”. The way design makes you feel is a simple rule of her work and a lifestyle.

Growing up in a metropolitan city Shanghai has awoken his passion for graphic design. Creating websites, designing smartphone applications, and minimalist photography are his specialisations. Consequently, he is enhancing his knowledge and expertise as a Graphic Designer working at Etnetera Vision, and together with his partner on private projects.

Jakub Reimar is from Prague. He has been interested in art since his childhood. He attended an Art school and also an art high school in Prague. Jakub works as a dtp operator and a freelance designer. He likes conceptual design.

Quyen was born in Vietnam and brought up in the Czech Republic. She is passionate about art and everything creative. Quyen’s background allows her to bring a unique sense of whimsy to her design. She would like to carry on producing work professionally, either in Vietnam or the Czech Republic.

David has been always influenced by type in any possible shape, scale or its given function. During last 18 years, David worked with all possible media and formats. He experiments with type and doodles as hand-craft and moved type from paper to public space.

Margaréta Fehér moved to Prague in 2011 to study graphic design. She enjoys experimenting with techniques and diving into different fields of design. Her interest towards product design is apparent in her final bachelor project. Her featured work is her own designed and branded backpack for A3 sketchbooks.

Stanislav has attended art classes since childhood, and studied packaging and graphic design during high school; so higher education in this field was a natural step. He identifies himself as an experimental graphic designer and he always tries to find varied ways to visually describe objects and situations.

Nguyen Thanh Son Vu is from Vietnam. He studies graphic design in order to improve his design skills and to pursue his passion and hobbies. He loves to illustrate ideas, which is one of his strong abilities, as well as everything about turtles.

Diana Khurshudyan is from Kazakhstan. She is half-Armenian, half-Kazakh, and these different cultural backgrounds give her work brightness and singularity. She is trying to combine fashion and graphic designs in her work. She is working on her own label now. Diana will continue studies in the MSc International Management programe offered by Prague College/Teesside University.

Marion Bonnouvrier is born in Cholet, a city on the west coast of France. Since she was a child, she's been a very passionate person. She always wanted to be creative, and she's been interested by digital art since she was fifteen years old. Afterwards, she started studying Art and Design at the European Advertising Art School, in France. A few months ago, she came to Prague to end up her studies and she's about to finish her Bachelor's degree at Prague College.

Kim is an ambitious new talent. His creativity is on point with illustrations. He practices different medias of Art e.g. Traditional art, digital art, tattoo, street art and commercial graphic design work. His future goal is to become a freelancer; to own a business that contributes and supplies clothing/accessories and tattoos in his very own unique style.

Mohamed Kurdi is a graphic and web designer with a strong IT background located in Prague, Czech Republic. He specializes in corporate identity, calligraphy, logo, and web design. His work is influenced by both Western and Middle Eastern styles.

Daniel Quisek is a graphic designer based in Prague. He is finishing his last year of BA (Hons) Graphic design at Teesside University. After graduation, he wants to make a big step further in his life and he wants to move abroad to start off his career in the place, where creativity hasn’t became just a word.

Jonáš Janoušek is a graphic designer from the Czech Republic. He is in his last year of BA (Hons) Graphic design at Teeside University. He would love to explore the culture of graphic design around the world after graduation.

Lucie Krepelkova is a creative graphic designer, interested in Fashion Design, Corporate Identities, Photography, Social Media and PR.  She attended Prague College for four years, graduating with a Bachelor Honours degree in Graphic Design. She is currently working as a PR Assistant for Stuart Weitzman.

Lukas Chladek is a young man who is passionate about creating. He loves graphic design as he can produce his thoughts and ideas into a real things, and thanks to this magical subject, he never stops discovering.

Kristýna Konečná is a multidisciplinary designer and illustrator with over six years' experience in graphic design. During this time she has been working in advertising agencies, studios and as freelancer. Currently based in Prague, Czech Republic.

Jeremy Courivaud is a french graphic-designer who came to the Prague College to obtain a BA in Graphic Design. Passionate about illustration and curious to explore different techniques,he would like to work on graphic design by the way of culture.

Le Ha is 22-year-old graphic designer, thinker and queen of spontaneous decisions. She was born in Vietnam, but moved to Czech Republic, when she was a 2-year-old. Ha takes her artwork as a mirror reflecting herself, her passion for handmade art, various materials, different techniques, patience, emotions and details.

Upon moving to the Czech Republic from Canada, David worked in the public relations industry for several years before going to Prague College for his Bachelor’s in Graphic Design.  He primarily works with digital technologies specializing in photography, photorealistic 3-D imagery and editorial design.

Aloïs was born in Vendée, France. Passionate about Art, Design and Photography, he studied a HND Graphic Design in Angers. Since moving to Prague, he enjoys the Bachelor's programme in Art at Prague College and his daily life in this new environment where he finds his inspirations.

Mikhail Solovarov is a graphic designer. His sphere focused on digital area, 2D illustration and 3D modelling. He gets inspiration from: music, arts, photography, typography, video games, cars and sci-fi / cyberpunk theme. For each project his goal is to reach a high visual quality.

I´ma Digital designer, with wide range of knowledge and skills in the area. In the past 5 years I started freelancing which gave me a lot of experiences in the field of graphic design. Recently my main focus has been Applications and UX Design. If you are looking for fresh, smart and trendy designs then I won´t disappoint you

Rysom Coffell is from the United States. He came to Prague hoping to improve his design skills. He works in a naive manner and brings abstract meanings to life through his work. His featured work is an identity redesign for the city of Milton-Freewater, Oregon.

Christophe developed a passion for creativity at a young age and therefore knew he would pursue a career in art and design. His concentration in design is in Corporate Identity and Branding, but he also spends his free time screen printing or doing other art in his studio.