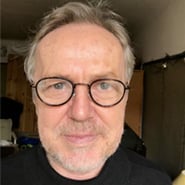 Željko Ivanković is an author, publisher, manager, university lecturer and former diplomat from Zagreb, Croatia, having significant international experience. Željko was economic counsellor at the Embassy of Croatia in Tokyo and in Canberra. Earlier in his career he was a well known Croatian economic and political journalist.

He received his PhD in political philosophy from the Australian National University. Željko has published several books and used to be a research director at the Croatian Banking Association; he was editor in chief of a leading Croatian financial magazine, Banka, and ran a Croatian publishing company SPO ltd (Contemporary Business Communications).

During the course of his career Željko is mostly interested in digital society and finance. He was lecturer at the Vern University in Croatia where he taught digital money, cryptocurrencies and financialization. He published the book Besplatno (Free of charge) about the political economy of the digital age. He wrote a history of Zagrebačka banka, the largest Croatian bank, which was published
on the occasion of the hundredth anniversary of its establishment.

His book Slučaj Agrokor (the Agrokor case) analyses the collapse of the largest Croatian conglomerate and investigates crony capitalism in Croatia as an outcome of the process of transition from socialism.

He has published a number of scientific papers, mostly about banking and the information society. His latest research interest is focused on an investigation into the nature of money of which analysis of digital currencies and finance is a significant component.

Recently, Željko runs a program on digital society at the Croatian National Radio, and publishes articles on digital finance. He is editor of an academic magazine Ideje.hr and organizes round tables, discussions, conferences and research activities.