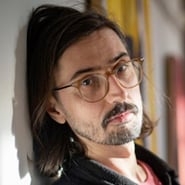 Martin Ožvold is a composer, sound designer and theorist.

He was born in Bratislava and lives in Prague. He studied electroacoustic composition with prof. Jonty Harrison and Dr. Scott Wilson at the University of Birmingham (MA), Sound Arts at the University of Middlesex London (BA Hons), Sound Engineering at the SAE Institute London (DipHE) and Materials Engineering at the Slovak University of Technology in Bratislava (Ing.). He completed a one-year postgraduate research internship at the Institute of Sonology of the Royal College of Arts in The Hague.

At Prague College Martin teaches sound arts in the context of multimedia production. He is also a sought-after lecturer for workshops at major Czech and foreign universities, conferences and festivals. He has presented or lectured, for example, at the Universität der Künste Berlin or at the Sheffield Doc fest.

Areas of his scientific interest and research are the cultural history of sound design and electro-acoustic sound production, the histography of electronic music and, last but not least, the methodology of teaching sound production and the popularization of audio culture.

His most notable and acclaimed artistic performances include music for Holly Roth for the Slovak National Theater, improvisation with the Birmingham Ensemble for Electroacoustic Research and sound concept, music and screenwriting for The Sound Is Innocent, directed by his wife Johan Ožvold. He is the founder of the _ZVUK_ platform. As a sound designer, he participated in the podcast Mathematics of Crime by Brit Jensen and Magdalena Sodomková. He collaborates with Czech Radio, London's Radio Resonance FM and BBC Radio.

Since 2020, he has been working as a sound playwright and designer for Bionaut Films, for which he created sound design for the audio series Anatomy of Fear, Therapy by Sharing - A Guide to Modern Relations, and the co-production feature film Runner (“Bėgikė”) by Lithuanian director Andrius Blaževičius.