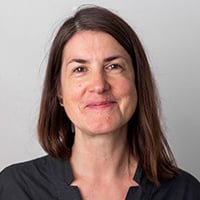 Programme Leader for MA Fine Art, Branislava is a researcher and translator.

Branislava was born in Prijepolje, former Yugoslavia, where she studied theatre directing at the Belgrade Academy of Dramatic Arts before emigrating and resettling in Prague in the mid-1990s.

Branislava has taught extensively in the UK: at the University of Roehampton in London (where she also received her PhD in Performance and Visual Culture); Goldsmiths, University of London, where she was awarded the Goldsmiths Peake Award for Excellence in Learning and Teaching; Chelsea College of Art and Design, University of the Arts, London; and the University of South Wales in Cardiff. She is an Associate Fellow of the UK Higher Education Academy.

She is a writer and researcher in the interdisciplinary fields of performance and visual culture, and continues to present her research at numerous international conferences in the UK, US, Czech Republic and Germany. She has published articles in international peer-reviewed journals, essays in artist books, and contributed chapters to two academic publications: Intimacy: Across Digital and Visceral Performance, Palgrave Macmillan, 2012, and Theatre and the Making of Subjects, transcript Verlag, Germany, 2012. She has also assisted Adrian Heathfield and Amelia Jones on the major performance anthology Perform, Repeat, Record: Live Art in History, published by Intellect Books in 2012, with 70 contributing artists and academics.

Branislava has curated talks and international workshops and seminars both in London and in Prague, and has for many years collaborated with the Refugee Week UK team, and with their new initiative PLATFORMA arts & refugees network.

She has long-term links to Prague and to Czech modern and contemporary art. As a translator, she has collaborated with leading cultural institutions, publishers, museums and art galleries in Prague and has translated several dozen major artist monographs, books and various other publications. Her most recent translations are included in the books: Vital Art Nouveau 1900, published by the Museum of Decorative Arts in Prague and Arbor Vitae in May 2014, Zbynek Sekal and Japan, published by the West Bohemian Museum in Plzen and Arbor Vitae in June 2014, and Jan Sagl: Ten Sides of the Same Coin, published by KANT and Leica Gallery in November 2014.